This was a nice short section. The first task was to arrange some fabric and make two 15 minute drawings. Then i was to focus on small parts of the fabric in 5 minute sketches done in 15cm squares.
This was quite good fun. I love drawing the folds of fabric as I think they can, quite quickly and easily describe the underlying shapes as well as being interesting subjects in their own right.
I'm quite pleased with my attempt and I can see how this could become a time consuming and highly pleasurable subject to paint and draw. Even for me, the most impatient artist, I could have spent ages doing this. As it was I had to drag myself away and I'm pretty sure I ran over time in my pencil drawing.
For my first drawing I wanted to give Lord Leighton's technique a go so I chose a coloured greyish sheet and a dark and light pastel pencil. The photograph hasn't shown the cream colour very well, in real life it's much lighter and represents the highlight a bit better.
Then I drew the same fabric in my A4 sketchbook using soft pencil. I think graphite works quite well for this subject because it can be applied heavily for the darkest shadows and sharp edges or softly for the changing tones over the folds.

Then I focused on parts of the fabric within 15cm squares. It didn't actually work out like I planned. I originally wanted to zoom in more and focus on a smaller section but each time I ended up drawing more than I wanted. The first two I used pencil and charcoal and the second two I used a compressed charcoal stick and then green and red pastel pencils. I thought the knot was interesting becasue it was all compressed. In hind sight however I would have zoomed in further and had less creases.

While I was on this section I wanted to give Henry Moore's technique a go. I did a very quick copy of one of his shelter drawings using a white oil pastel overlayed with a wash of ink. If I tried it again I would apply the wax a bit harder but other than that it worked quite well. When you are putting the white crayon on the white paper you don't have much idea how its going to turn out so I was relieved when I put the ink on and it wasn't just a blob. It would be good to get some thinner crayons to get greater detail.


The final piece for this section draped some fabric over my husbands legs while he was sitting on the sofa. He had one leg half up on the sofa which has maybe confused it a bit. I spent about an hour on this and focused completely on the material of his top and the cover, leaving the head and arms very rough. The cover was a much stiffer fabric than his top and I think this has come across in the drawing.


Elaborate depictions of clothes and fabric have been a constant feature in art throughout the ages. The grand portraits would had layers of luxurious satins and velvets which would show the wealth of the sitter. Artists must have spent huge amounts of time on painting clothes and drapery and I can see why.
Check and Log

Did you approach the figure as a whole? I'm not sure if I have. I concentrated on the fabric too much to the detriment of the whole figure. In fact I didn't even leave enough room for the feet.

Did you manage to create volume in the folds of fabric? I think the fold in the fabric can be seen due to the highlights and shadows.

Posted by Kappleto at 06:54 No comments:

I wanted to look at some drawings of the clothed figure before I started this section. I had some artists in mind: Frederic Leighton; Henry Moore and Alison Watt.


I went to an exhibition of his drawings and studies at the Hunterian Art Gallery a few years ago. I just happened to pop in and I wasn't aware of the artist before hand. However I was really impressed by these studies. They were so beautiful and so detailed, I was in awe of the work that went into them. My drawing tends to be very rushed and I'm too impatient to spend ages on tiny detail. Paradoxically though, I am most inspired by this type of drawing and painting.
In these studies for his large paintings he repeatedly concentrated on figures draped in yards of (seemingly) luxurious fabric. He predominantly used black and white chalk on coloured paper or graphite on white paper. 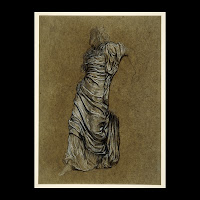 These studies above demonstrate the lengths to which he went to prepare for his paintings. He was known to carry out many preparatory sketches focusing on small areas of figures which he then traced onto his canvases. At first glance these drawings of drapery have an abstract quality but Leighton has skillfully described the curves of the underlying figure so that and on further inspection they are almost nudes.

He has used the brown paper as the main tone for the fabric and the black and white chalk serve to show the shadows and highlights respectively. This technique is so simple and yet so effective.

I don't know an awful lot about Henry Moore but I happened to catch a programme about the drawings he did when he was sheltering in the London Underground tunnels during an air raid in WWII. As far as I can remember, he was stuck there one night and had to shelter so made use of his time by studying his fellow sufferers huddled together under blankets. He then made drawings from memory and would came back to London over and over for inspiration. 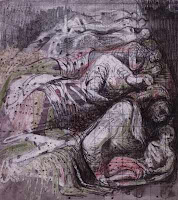 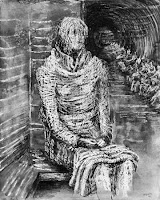 Many of his drawings were done using a "wax-resist" technique in which he drew with a wax crayon and laid washes of ink over the top. This technique works really well for the subject I think. You really get the feeling of a blanket draped over a sleeping figure. The wax is laid down where the highlights would be and then the other tones go on using watercolours or ink. I'd like to give this method a go.

I was reading over the instructions for this section and we are asked to draw lots of squares in which we then draw close up areas of a piece of fabric, so in essence each one is a little composition in itself.


This made me think of the Scottish artist Alison Watt. A couple of years ago there was a BBC Artworks Scotland programme which documented her solo exhibition Phantom, at the National Gallery in London. Although they aren't drawings, her amazing abstract close-ups of fabric on a large scale are breathtaking in their beauty. Luckily there is one of her paintings in the Kelvingrove art gallery in Glasgow that I have been able to see.


I love the way she has made such a simple subject so beautiful. She has obviously spent a lot of time considering the composition for each painting, each crease and each highlight are carefully thought out.
The link below on youtube shows some of her preparation for her NPG exhibition and is a great insight into how she works.The appears to have been influenced by Jaque Loius David and Jean Auguste Dominique Ingres and the way they painted fabric particularly the male fashion at the time, the neck-kerchief. She talks about negative space and her difficulties depicting this. This negative space is the focus of Root and Phantom shown above.

Although these are oil paintings, because they are monochrome it is easy to see how they could translate to drawing using pencil or charcoal on white paper.